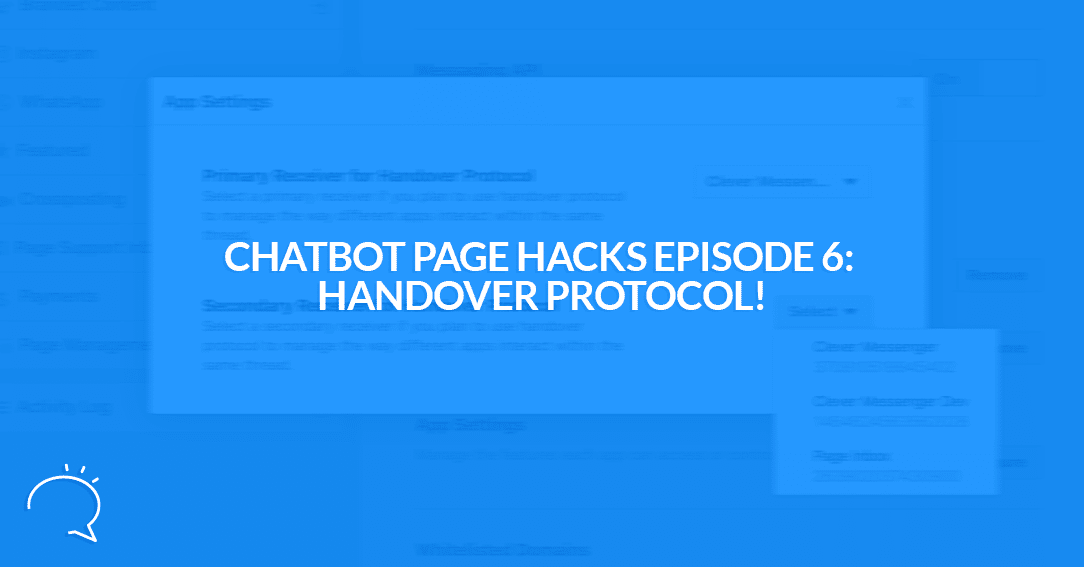 Ever wondered what the Handover Protocol, Primary Receiver, and Secondary Receiver stand for? Yes? More people do! That’s why we dug a bit deeper so we can give you a better explanation of what you can expect. In episode 6 of Chatbot Page Hacks, I’m revealing what this actually is and what it means for you and your business.

(Hint… If you’re using more than one Facebook App on your Facebook page… Then this is definitely worth watching.)

So, in this episode of Chatbot Page Hacks, I show you where the limitations are, and what it all means.

To summarize, in the Handover protocol, it’s the primary receiver that handles most messages! The Secondary Receiver is usually used in a scenario as explained in the video. Let’s say you want to have your chatbot handle most of the interactions. Then setting up your chatbot app, i.e. Clever Messenger, as the primary receiver is the way to go. Then, if you have another application that’s being used by your support staff for live support, use this as the secondary receiver. It’s a clean good way to run both technologies at the same time.

Over at Clever Messenger, we do have Live Chat feature. This means the above scenario doesn’t really go for Clever Messenger. In fact, it was to help illustrate a scenario. Nevertheless, it’s important to give this Handover protocol a lot of thought… Give Clever Messenger a try, and use it to start giving support through bots the right way.

Watch this video on YouTube and join the commenting!

Following below is a lightly edited transcript of Chatbot Page Hacks – Episode 6:

Stefan van der Vlag: Hey guys, girls, ladies, and gentlemen, this is Stefan speaking to you once again. And this is episode number 6 of the Chatbot Page Hacks series. Now, what we are going to discuss is basically the handover protocol and what this is, this is actually a setting that you can see inside your Facebook page right here. By clicking on Settings, I just navigated to the Settings page. And all I need to do is go to Advanced Messaging right here. Now, this is important if you are going to use more than one Facebook app on your Facebook page. Or perhaps you are currently already using multiple Facebook apps on your Facebook page and this is where you actually want to be.

Stefan van der Vlag: Especially if those apps are doing something with your messaging API from your page, right? So this is something we need to take note of. Right there under Connected Apps, you can see the apps that we have connected right here. We have, for this particular Clever Messenger page, obviously have the Clever Messenger app connected. And the Developer app, which we use for testing. Now, we don’t have the page, or I should say handover protocol set up for this particular page but we do have it set up for other pages. And let me just show you where this setting is. So let me do that once again. It’s right here under App Settings.

Stefan van der Vlag: And there it says to manage the features each app can access or control. Now, if I click on Configure right here, the Primary Receiver for Handover Protocol is Clever Messenger and I can select a Secondary Receiver for Handover Protocol right here as well. Now, I can go for the Page Inbox as well. That’s there by default but I can also choose for the other application right here as well. Now what’s cool and why you want to consider ultimately using this, perhaps, let’s say that there is a use case of you having an app that actually does your chatbot stuff, like Clever Messenger, and you have another app you want to use for your live agents, your support agents.

Stefan van der Vlag:  Let’s say there is a bunch of other apps that actually only provide a platform that connects all those social media tools or platforms together in terms of live chats. So you have WhatsApp Messenger, Instagram Direct, Telegram, all these live chat combined into this one platform. And you want to use that for your support agents, right? Now, you need to make sure that you set it up correctly. Now, on this particular use case, you want to have the chatbot basically catch most of the questions. So 80% of the questions are basic questions that can be answered fast and easy by a chatbot and then have that other 20% of people needing a little bit more human attention and direct those to the second app.

Stefan van der Vlag: Basically, the other where the handover comes into play, right? All you need to do is basically connect both the apps right here to your Facebook page and then select right here which app is going to be the Primary Receiver for Handover Protocol, and the Secondary Receiver for the Handover Protocol. Now, with that said, there is an easy article right here, which goes moreover Handover Protocols. This actually says Messenger Platform handover protocol enables two or more Facebook apps to participate in a conversation by passing control of the conversation between them. This feature can be used in many ways to enrich your Messenger experience.

Stefan van der Vlag: For example, this protocol makes it possible for a page to simultaneously use one Facebook app to build a bot for handling automated responses, and another Facebook app for customer service with live agents. Well, what do you know? It’s exactly the same scenario I’ve just given you as well at the start of this video. And let’s just finish this off, guys. By default, all messages are sent to the Primary Receiver app. When control of the conversation is passed to another, the Messenger Platform will send messages from the conversation to it instead. Only one app may control the conversation at a time.

Stefan van der Vlag: This is only logical because you don’t want to have two chatbots, two apps that are actually managing your chatbot stuff to send out messages. This results in duplicate messages. This results in a lot of weird things going on inside your Facebook apps. So always go with one app that has the Primary Receiver set to on. May continue to listen to the conversation by subscribing. Yeah, so the other app always listens if you allow it to do so. So this is a nice little table right here. The Primary Receiver can pause the thread control, take thread control, standby channel and the only thing it cannot do is request the thread control.

Stefan van der Vlag: That is actually done by the Secondary Receiver. So how this works in a technical standby. Let’s say that there is a person that needs human attention. And they do this by clicking on a button that says connect me to a human. At that point, you can add the Secondary Receiver request for the thread control. And all automations are temporarily stopped and the chat is happening with the live agent.

Stefan van der Vlag: Okay? Very, very easy stuff once you put this into practice. To explain, it’s just a little bit… It’s something to wrap your mind around. So with that said, I think that covers the Handover Protocol. It’s something you do need to know, especially if you have been trying a lot of other chatbots, creation, and marketing suites out there as well. Your page might be full of connected apps and you, to be honest, want to remove the ones you are not using anymore and make sure that the ones you are using the Primary Receiver, yeah?

Stefan van der Vlag: So this way you make sure that there are other tools you don’t even work with them or get that data. You don’t want that anyway. And make sure that the app you are actually working with is getting the data and can actually do all that glorious stuff. Yeah, all right, that’s it. This was Stefan speaking to you. This was episode six. I’m going to do one more episode after this. And that’s going to be about the automated responses. All right, thanks for watching this video and I will catch you in the next one. Bye for now. 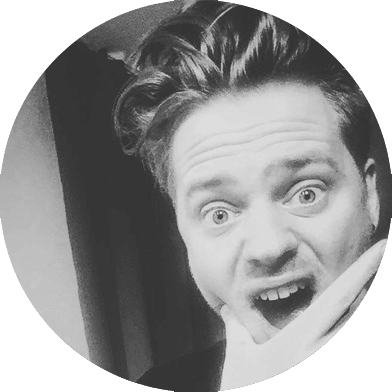